GHANA’S NATIONAL CATHEDRAL: Even the President might have no clue what he is doing! | Part 2 of 3

HomeExistentialism GHANA’S NATIONAL CATHEDRAL: Even the President might have no clue what he is doing! | Part 2 of 3
Yaw Perbi March 13, 2020 Existentialism, Faith, Leadership, National Development, Public Leadership3

Everyone’s talking Corona now (at the time of posting this). I find even scientists and doctors using words like ‘hope,’ ‘faith’ and ‘pray.’ In times like these we remember there is something beyond our five senses. Indeed, “Man shall not live by bread alone.” When you take a break from the virus that is being coronated, read about how the design of the National Cathedral Ghana CORONATES CHRIST the King in the African context. 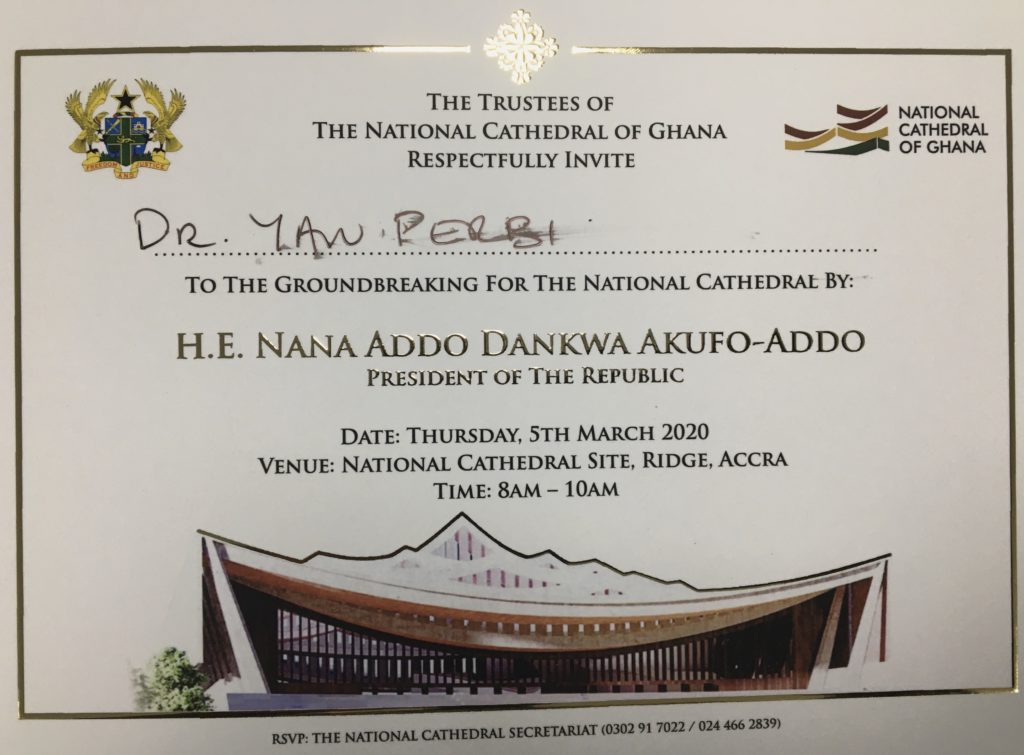 To the glory of God, I had the honour of receiving an official invitation to the historic, groundbreaking for the National Cathedral Ghana

You have probably come across the line made famous by the late John Stott about certain people’s Christianity being “one mile long but an inch deep.” That, to a large extent, describes African Christianity (we’re not alone but Africa is my focus now). One of my biggest problems with Christianity in Ghana is the issue of large numbers of professing Christ followers yet such shallow discipleship and not enough positive impact on the spheres of society: arts & entertainment, business, education, family, government, media.

While desperately working on the issue of discipling the peoples of Africa themselves, we also have an equally important duty of discipling the structures and systems in Africa, from Archaeology to Zoology. In the famous words of former Dutch prime minister Abraham Kuyper, “There is not a square inch in the whole domain of our human existence over which Christ, who is Sovereign over all, does not cry, Mine!” I find that Europe, when it had the chance a millennium ago, and North America in the last 200 years, discipled the society’s structures and systems to the effect that today although these continents do not necessarily have the most numbers of self-identified Christ followers and are becoming increasingly secular, even atheists and agnostics ethically behave like Christians on account of the Judaeo-Christian influence over the centuries. Ask where the work ethic came from, for example, or even the notion of human rights. We have the opposite in Africa, where there are so many nominal Christians but our societal systems and structures are inadequately discipled. What has this got to do with the cathedral?

I was amazed when I heard the architect of the National Cathedral explain why that particular piece of land in Accra. Sir David Adjaye passionately speaks here about understanding the monumental core of Ghana’s capital, all a walking distance from the Independence Square: there’s the area our ancestors and heroes are buried (both military and civilian) and the State House and Parliament (with the international conference centre across it) where our current leaders to do their gig but what has been missing is the faith space, a “missing link in the nation’s architecture.”  For an ‘incurably religious’ country, therefore, the National Cathedral finally becomes that sacred space and the people’s place. I like that we are structuring and systematizing what we believe in and putting our money where our mouth is in concrete structures at our national core.

It thrills me that beyond the cathedral as concrete (hardware) though, there is also the idea of the cathedral as convenor (software) of crucial national conversations regarding faith and public life to, as my professor friend Esi Ansah put it in a recent Face Book post, “build the cathedral within.” Whether hosted under the auspices of the National Cathedral Ghana (in name) or as the venue or both, these are the things that will reengineer our mindsets and attitudes, structures and systems, to see the transformative power of the Gospel on society. It will be a mistake to construct a physical cathedral without building the internal one as a people and systematizing what a cathedral to the most High symbolizes in our national attitudes and values. On the other hand, it is equally erroneous to say all we need to do is “build the cathedral within” without an outward expression of an inward and spiritual reality. This isn’t either/or but both/and.

We are building a nation here, a cohesive entity that must have spirit; not just a conglomeration of social services! My maternal grandfather, Emeritus Professor J.H. Kwabena Nketia, shared with me how he highly appreciated that about Ghana’s first president, Osagyefo Dr. Kwame Nkrumah. The latter knew we needed to garner the spirit of the people and not just their bodies. May the distillation of our Christian values and ethics into the physical cathedral structure and the centering of it in the monumental core of our national capital be a daily reminder and constant inspiration to think “freedom and justice” and all that is right/true and then to practice same always, to the glory of the God of Heaven.

While the demolition of a few colonial buildings at the cathedral site is of sad note to some—but really, we have enough forts and castles and other buildings elsewhere as souvenirs of our sordid-but-should-not-be-forgotten past—in a sense it has been a statement that this young African country, Ghana, is cutting her teeth in this unavoidable intersection of gospel, culture and church. Any missiologist worth their salt should readily see the coming of age of African Christianity in this grand undertaking of a national cathedral. The idea wasn’t mooted by a white man nor the blueprint drawn by one; it shall not be built by Anglo-Saxons or Caucasians either. Although Africa actually shaped the European mind through the early church fathers like Tertullian and Augustine in the first 500 years of the Christian movement, our parts of the western coast of Africa were reached only in the last 500 years anno domini by sea-borne Europeans making some erroneously claim Christianity to be a “white man’s religion.” Christianity has been indigenous to Africa since the Ethiopian eunuch’s encounter with Apostle Philip in the first century!

Indeed, some white missionaries’ insistence on discarding our rich African traditions, the substitution of our meaningful local names with European ones like George (so-called ‘Christian names’), the condescending attitude towards our dress and manner of life etc. give just cause for rebellion against the faith they brought. But the missionary God Himself who made all people and is the originator of all that is good in all cultures (tainted by sin since the fall of man in Genesis 3) has revealed Himself in every culture so that all humankind may be drawn to Him. He has expressed Himself through each culture, including our approximately 80 languages in Ghana, that He may be seen, understood and worshipped.

The same day I attended the groundbreaking of the national cathedral on the eve of Ghana’s 63rdindependence celebration, my Achimota School year group began the formal activities for our 25th anniversary/homecoming celebrations and 93rd Founders Day activities. It struck me how the founding fathers of the school that has produced more Ghanaian (and African) heads of state than any other, wanted an institution whose ideals were “the belief on which all else rest, in Jesus Christ as the revelation of all time and all people, of the love of God, and as the guide and pattern for our lives” and  simultaneously one where there was “respect for all that is true and lasting value in the old African culture, beliefs and ways of life.”

With the coming of age of African Christianity, the National Cathedral Ghana is a welcome discontinuation of European cathedral forms of the past, especially gothic architecture. Rather than spirals and bells, all that rings true and good in our old African culture, like the expression of divinity through umbrellas, has been adopted for this edifice. If Jesus Christ the King were to take on flesh in a Ghanaian culture, paramount chief of all of Ghana, how would that be expressed? You will notice from the cathedral design that the roof (as only one example) is wavy like the tapestry of royal umbrellas in durbars with the highest umbrella (highest point of the roof) being where Christ the King ‘sits,’ at the altar. This is one of the essential missiological thrills of the national cathedral.

For indeed, in the words of Kenyan theologian John S. Mbiti, “Christianity is always a beggar seeking food and drink, cover and shelter from the cultures and times it encounters in its never-ending journeys and wonderings” (Mbiti 1970, 438). Finally, there is an edifice of national stature that has offered the proverbial Ghanaian hospitality to the Christian faith in a deeply symbolic way. Christianity has taken on the cover of Ghanaian culture and has become authentically African. This is not a white man’s cathedral; this is our cathedral to the God of all the earth and of all flesh! As Mbiti states elsewhere, “…Europe and America westernized Christianity. The Orthodox easternized it. Now it’s our turn to Africanize it.” Yes, we have!

A LIGHT TO THE NATIONS

Many comparisons have been made between Ghana and Israel, some of which don’t hold water. However, Ghana, like ancient Israel, has apparently been selected by God as a covenant people to be a light to the nations (we will need a whole different article about prophecies made about Ghana). As the lode star of Africa, the “Black star of hope and honour to all who thirst for liberty,” neither our geographic or population size should warrant the prominent place we hold in Africa as the first country south of the Sahara to achieve independence from colonialism or any other accolade we’ve been showered with. Whether it’s our consummate idea of a united, free and prosperous Africa or producing a United Nations Secretary-General in the person of the late Kofi Annan, Ghana has throughout her history captured the imagination of Africans and the world at large. It is remarkable then that now, a landmark of Christian ideals and worship and a site for pilgrimage in Ghana will draw nations to our light (sure, and we’ll make some money too!). May the Queen of Sheba types travel over land, sea and air to come and see the marvels of the Holy One of Israel, the God of Abraham, Isaac and Jacob right here in Black Africa.

O that that we might have a taste of the future glory of Zion Isaiah prophesied, right where we are: Arise, shine, for your light has come, and the glory of the LORD rises upon you. For behold, darkness covers the earth, and thick darkness is over the peoples; but the LORD will rise upon you, and His glory will appear over you. Nations will come to your light, and kings to the brightness of your dawn. Lift up your eyes and look around: They all gather and come to you; your sons will come from afar, and your daughters will be carried on the arm. Then you will look and be radiant, and your heart will tremble and swell with joy, because the riches of the sea will be brought to you, and the wealth of the nations will come to you (Isaiah 60:1-5, NIV).

Among the sites within the National Cathedral Ghana will be Africa’s first Bible Museum and Documentation Center and replicas of significant places in the Bible like the walls of Jerusalem and the Garden of Gethsemane, right where we are, without a flight to ‘the Holy Land.’ The stone from Jerusalem that was brought in as a foundation stone during the groundbreaking has symbolically brought Jerusalem to Accra. Emmanuel! If God is with us, Jerusalem stone or not, then our land too, Ghana, has become holy ground.

TO BE CONTINUED here.

In case you missed it, Part I may be found here. 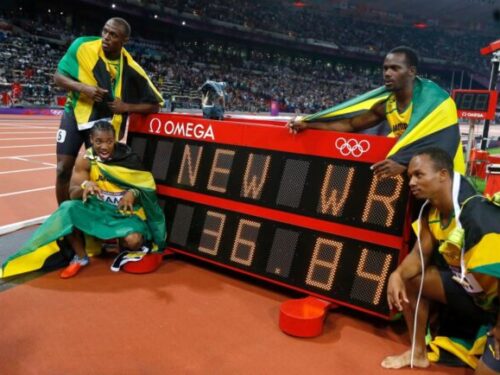