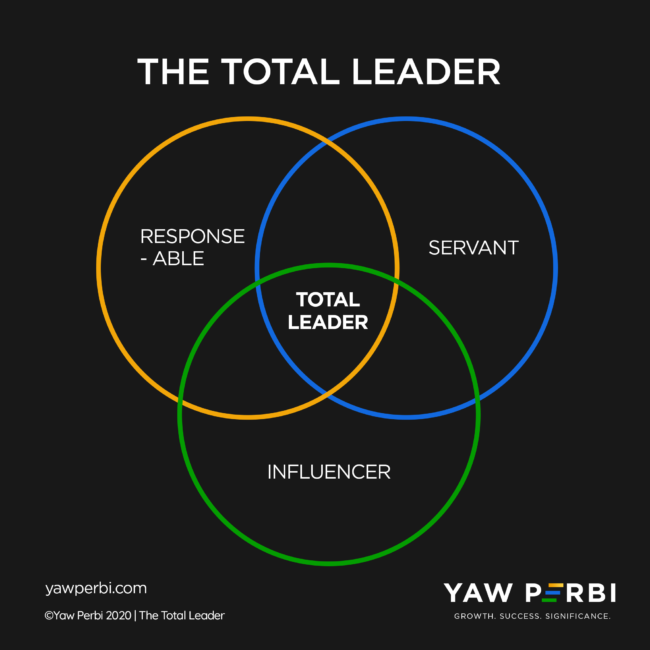 All these politicians are falling over themselves just to SERVE us?

I doubt it. I am skeptical that all these politicians are falling over themselves just to serve us, we the people. After a couple of decades of being a student of leadership, including a Masters in Global Leadership, I came to this simplicity at the far end of complexity that leadership is basically response-ability, service and influence. A total leader is and does all three. But even service has different degrees. A Total Leader is response-able, serves and influences.

A few years ago some people were very cross with me after I mentioned on a live television interview on Good Evening Ghana that the then Ghanaian president wasn’t much of a leader (in terms of influence). He was very response-able, no doubt. I knew that quite well personally since we used to live in the same residential area and attended the same church. The honourable gentleman was a great servant as well–even as vice-president he was still volunteering to do such ‘menial’ tasks in the community. Such a role model in humility. But his charisma and ability to make things happen in and through others (influence) left much to be desired.

Of course there are those who are great public influencers but can’t even be response-able in their own marriage or toward their children. Such incomplete leaders are asked by the lawyer-turned-preacher, Paul, in the ancient texts, not to vie for leadership in the church. Here is the rhetorical question the trained lawyer poses: “for if someone does not know how to manage his own household, how will he care for God’s church?” A total leader is response-able, serves and influences. Now a focus on servanthood.

Ideally, the term ‘servant-leader’ should’ve been tautological as a leader necessarily must be one who serves. Unfortunately, more often than not, it isn’t so. Leadership is often anything but service. In fact, leadership is so much more synonymous with influence that when Robert Greenleaf introduced the term servant-leader around 1970 he literally mean servant-influencer. Here’s what he says in his The Servant as Leader essay back then:

The servant-leader is servant first. One wants to serve first; then one aspires to lead [influence]. This is sharply different from one who is leader [influencer] first, perhaps because of the need to assuage an unusual power drive or to acquire material possessions. A servant-leader focuses primarily on the growth and well-being of people and the communities to which they belong. The servant-leader shares power, puts the needs of others first, and helps people develop and perform as highly as possible.

THE MYSTERY OF MINISTERS

On a recent Lions Inspire Cubs hangout with children (7-14 years) to  introduce them to leadership early, some of the cubs literally gasped when they heard me say that the ministers of state that throw their weight around are actually our servants. “Whaaat?!” Yes, minister is the same word as servant. Who could blame these children, for they have hardly seen as humble servants neither the ministers in politics nor ministers in pulpits. I often quip that if I ever became president of a nation I would change the term ‘ministers of state,’ in order to hear it afresh and for shock effect, to ‘servants of state.’

The last couple of months have been a heated political season on both sides of the Atlantic, particularly with my neighbours to the south (the United States border is barely 45 minutes from where I live in Montreal) and in my homeland Ghana. As I’ve seen the passion and commitment in the campaigning, counting of votes, recounting of votes, challenges in court etc. I can’t help but ask: All these politicians are falling over themselves just to SERVE us, we the people? Perhaps a very tiny fraction but largely no; it is mostly to serve their parochial interests. Even for those response-able influencers who are genuinely laying themselves down to minister to us as servant-leaders may I ask: what kind of servant will they be?

There are at least four types of servants.

Just as “love” is just “love” in English but has at least four variants in the Greek, the ancient Hebrew text is rich with a variety of words for “servant.” Four of these different hues of servant are Ehbed, Abad, Sakyir and Sharath. Let me explain.

1. LOVE SERVANT (Ehbed): This type of servant is totally sold out to those (s)he serves, not so much out of obligation and duty or for financial compensation but pure love. The Hebrews of old were not allowed to enslave their own. If any of their own people—Hebrew men or women—however sold themselves to someone (usually out of dire socioeconomic hardship) they were to serve their fellow Hebrew employer only for six years maximum. In the seventh year they must be let go free, liberally loaded with gifts of livestock, grain and wine. But there was a caveat: “…if your servant says to you, “I do not want to leave you,” because he loves you and your family and is well off with you, then take an awl and push it through his earlobe into the door, and he will become your servant for life (you may read the entire text here). The love servant is one at the complete disposal of the person(s) they serve out of love. Are you (or those you’re voting for) at the complete disposal of the people out of love?

2. SACRIFICIAL SERVANT (Abad): This one has given up a lot to serve. They are characterized by complete sacrifice. This is typically a servant who gives up personal rights, including inheritance, in order to work in the fields or tabernacle (see Numbers 18:7 and 23). The Levites of old were abads. As The Maxwell Leadership Bible puts it, “in a similar way, leaders must sacrifice their rights and stay surrendered to the cause.” Are you this kind of sacrificial servant-leader?

3. HIRED SERVANT (Sakyir): This is the quintessential ‘paid professional.’ In other words, a ‘hired hand.’ Irrespective of what they do, there is a clear understanding that they are hired per hour/day/week/whatever and will receive due compensation. Whether it is fair wages or not is not the object of this discussion; their service is paid for. Remember the love servant conversation above (under ehbed)? When a Hebrew sold themselves to work for another Hebrew they were to be treated as hired hands and then contract automatically ended after six years. It is after this they can choose to become a love servant (see Leviticus text). Unfortunately, the closest thing to a servant I see with many ministers of state and church alike is that of a ‘paid professional’. And you know corporate leaders are not there to serve either when they pay themselves fat salaries and juicy bonuses on the backs of suffering employees, even when their companies are struggling for survival! It’s the money and the trappings of the position that is the draw, not love (ehbed) or sacrifice (abad).

4. MENIAL SERVANT (Sharath): This is the down low of service. This is the most beautiful when done not because the servant-leader has no more nobler service to do but a choice to go down low for the sake of raising the people/mission up high. Sharath is the Hebrew word used to describe Joseph’s servanthood in prison (see here) and Joshua’s attendance to Moses as his aide (see Exodus text). A true leader must serve the people and the cause, irrespective of how down low the role may be. By the way, this same Sharath word in certain contexts can stand for worshipper.

Politicians like Nelson Mandela are too few. I remember as a boy when he was released from prison in February 11, 1990 after 27 years! The whole town where I lived erupted with joy and the sound of cars honking was deafening. Mandela sure had influence–he was a leader. Of that day of freedom he said, “As I walked toward the prison gate and was among the crowd, I raised my right fist and there was a roar. I had not been able to do that for 27 years. It gave me a surge of strength and joy.”

But you know what else he had? The spirit of servanthood. That same evening when he spoke to a large crowd at the Grand Parade in Cape Town, he said, “I stand here before you not as a prophet but as a humble servant of you, the people. Your tireless and heroic sacrifices have made it possible for me to be here today. I therefore place the remaining years of my life in your hands.” I don’t know about you but I can’t help seeing an ebed, abad, sakyir and sharath all wrapped up in one in the man, his words and works–from prison to president.

The ultimate example of leader as servant is the greatest leader who ever lived, Jesus Christ. He called himself ‘Son of Man’ and did not just ‘talk servanthood’ but walked the talk. Anyone who could teach as he did and perform miracles and draw crowds of 15,000 some two millennia ago without social media sure had influence. It is he who called his followers who were jostling for political power, to sit at his right and left in their perceived imminent government of Jesus, and said to them:

“You know that those who are regarded as rulers of the Gentiles lord it over them, and their high officials exercise authority over them. Not so with you. Instead, whoever wants to become great among you must be your servant, and whoever wants to be first must be slave of all. For even the Son of Man did not come to be served, but to serve, and to give his life as a ransom for many” (Mark 10:42-45).

I can’t speak for leaders of other faith persuasions but for Christ-followers there is no choice but to love and live and lead like the ultimate servant-leader. Paul writes, “In your relationships with one another, have the same mindset as Christ Jesus.”

I initially wrote this piece with a holier-than-thou disposition thinking I was a reasonably good servant-leader myself only to get my bubble burst by my dear wife who gave me painful feedback that I needed to hear: “At home you are more like a boss-servant–a boss who tries to serve. You serve alright but only when you want and how you prefer to.” Ouch! I’m eating humble pie right now.

In the words of my mentor John C. Maxwell, “Leaders must never forget that God calls them to serve. If our Lord [Jesus] could wash His disciples’ feet as a sharath, then how could we frown at becoming an ebed?” So you too, take a long look at the list of four servant types above and a good look in the mirror: which kind of servant are you? Then linger awhile over the lengthy list of those longing for your vote and see whether they are preoccupied with status, salary and stuff or serving. True leaders serve their people towards their purpose; not their parochial interests. I am a recovering boss-servant.