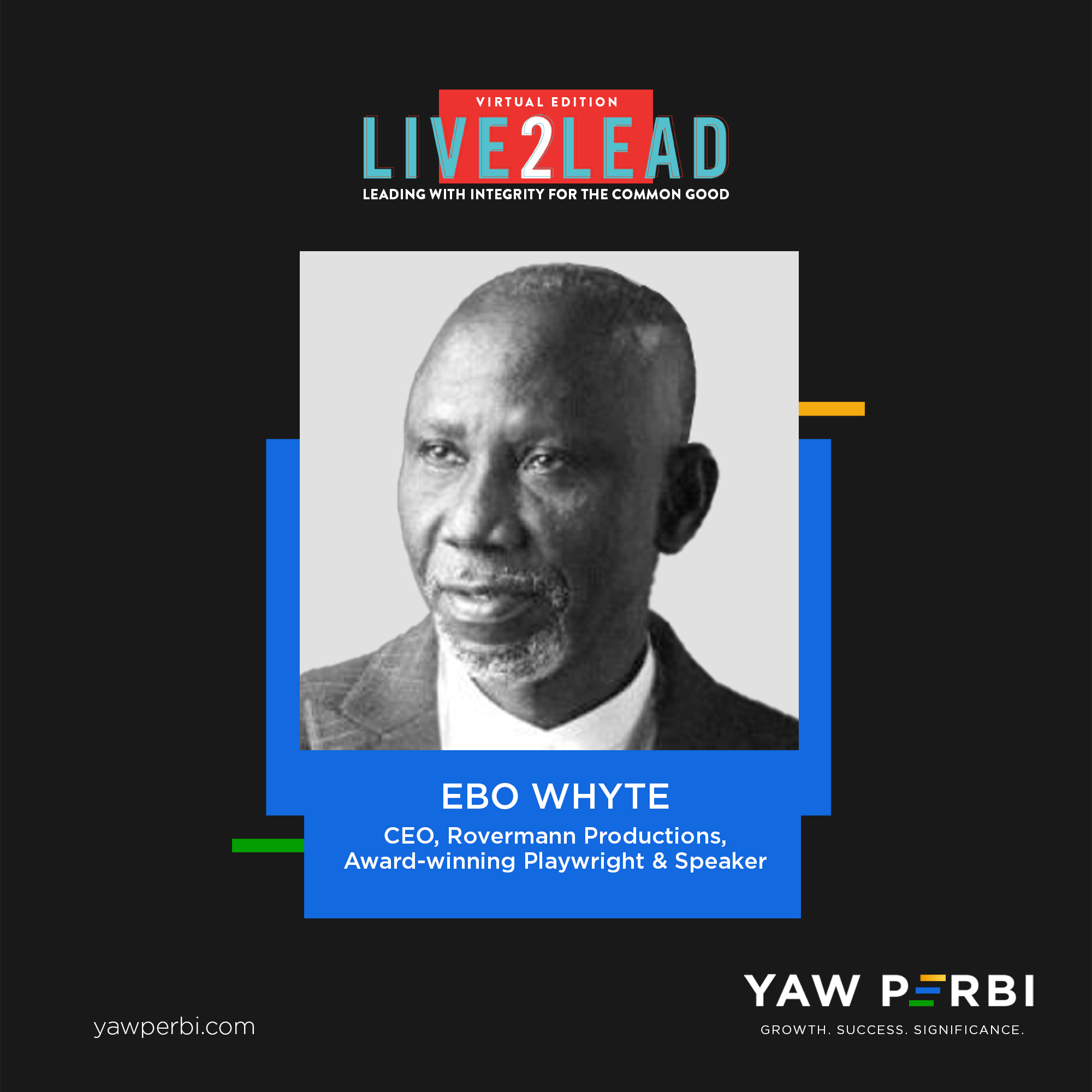 Everyone calls him “Uncle” without even thinking twice about it. Whether young enough to be their son or old enough to be their grandpa, “Uncle” is everyone’s uncle. A voice of reason, counsel in season, James Ebo Whyte, affectionately known nationwide as “Uncle Ebo” is the people’s uncle, hands down.

Mr. James Ebo Whyte is the CEO, heart and brain behind Roverman Productions. He is nationally acknowledged as an accomplished, award-winning playwright and highly sought-after motivational speaker. James Ebo Whyte constantly challenges Ghanaians to think more about the world they live in and the contribution they make to it. Just the day before the October 7, 2022 Live2Lead conference at which he was speaking, he unveiled to his drama troupe his 51st play in fourteen years! A hearty congratulations to the prolific playwright.

INTEGRITY IN THE ARTS & ENTERTAINMENT INDUSTRY

At Live2Lead 2022, Uncle Ebo was the only gentleman among three distinguished leading ladies from the corporate and entrepreneurship spaces as well as the public sector. Their first job was to respond to the submissions on “Leading with Integrity for the Common Good” made in the earlier hour by Patrick Awuah, founder and president of Ashesi University. Uncle Ebo held our attention as he raised issues of integrity in the arts & entertainment segment of Ghanaian society that he had with intentionality decided to counter, like giving kickbacks from corporate sponsorship. He uttered with conviction, “there are sponsorships we know we’ll never get for our plays because of this.” And he’s fine with it, as he knows that integrity comes at a cost.

One of the most amazing feats of Roverman Productions has been putting up a new play every quarter for the last decade-and-a-half and resolving to always start on time, also a matter of integrity. In fact, one of the participants at Live2Lead, a corporate governance expert, interjected that one reason she chooses to go and see Ebo Whyte’s plays is that she can guarantee they would commence on time. Again, Roverman has gone against the tide by ensuring pristine toilet facilities at their play venues and three levels of security at events to ensure patrons have a heavenly experience and leave with no bitter taste in their mouths. To the people’s uncle, excellence in these areas is a matter of integrity.

OF TEENAGE FOLLY AND GAMBLING

We intentionally wanted to leave the Live2Lead conferees on a note of hope, especially hope in Ghana, and Uncle Ebo did not disappoint. While admitting we have mega challenges in the nation he reminds us that we’ve not only been in worse times but also that in the annals of nation building globally, at 60 years Ghana is only a teenager. The national happenings that leave us in consternation are akin to teenage tantrums and this too shall pass. We do have quite a degree of national folly though, which we need to be cured of, he confesses.

Uncle Ebo’s belief in Ghana is so solid that his parting words were the following: “Whoever bets against Ghana will lose.” For a full buffet of this scintillating conversation look out for a recording of the hitherto livestreamed video (currently only available to paid participants) or invite Live2Lead to rebroadcast in your context (company, community, church etc). You don’t want to miss Live2Lead 2023 on October 6, next year, Deo volonte. Pinned on the first Friday of each October, National Leader Day after National Leader Day, building a leader at a time and one centre of excellence at a time, we shall surely get to the Ghana we want. And who knows? Perhaps sooner than other nations have.

December 20, 2022
PrevPreviousMeet Eric Thomas, a Fireball to Light a Fire Under You!
NextMeet Patrick Lencioni, the Workplace Guru.Next