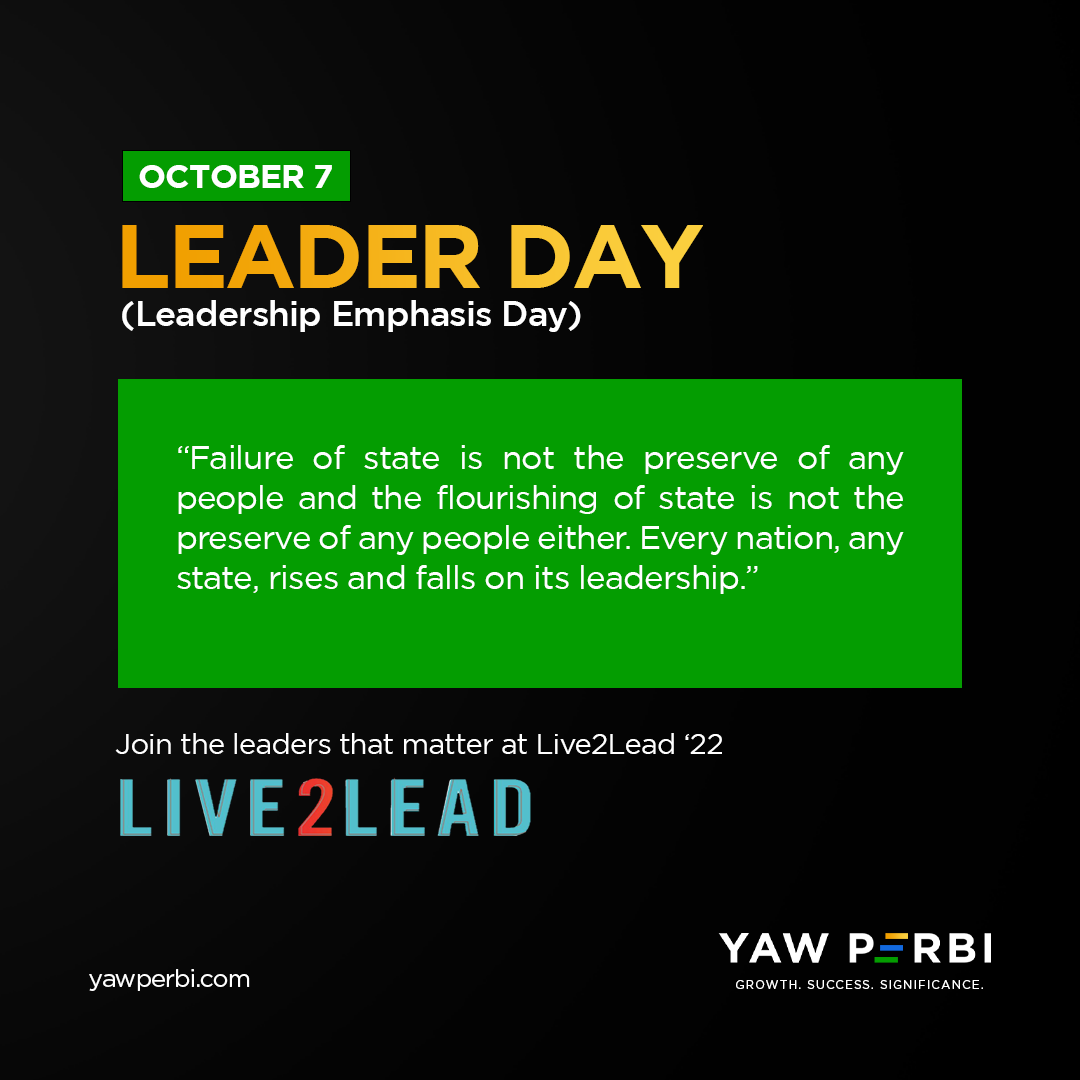 This is a true story: A few years ago, a handful of us John Maxwell-certified coaches and trainers from Africa were trying our possible best to get John, the world-famous leadership expert, to visit a particular African country and engage their president. A good number of Maxwell-certified leaders have been travelling with John to specific developing countries to engage them in a bottom-up transformation process that have done these nations some real good and we hoped same for this African nation with great potential. But John doesn’t come cheap. In fact, one of us was serious enough about this that he cashed in part of his 401k (retirement savings in the U.S.) to make this trip possible. It was such a struggle to gain access to the president, like pulling teeth! Eventually we did. To my ‘shock and awe’ (just remembering U.S. President Bush Jnr.), this African president did not even know of John Maxwell! That is when I knew the country wouldn’t do well. And I was right.

LEADERSHIP IS THE TIDE

Over the last few years, especially with the Trump presidency and with the advent of social media proliferation, many of us have seen parts of the United States that we have never seen before. Horrible parts and horrific things—whether it is the wicked knee of a policeman on George Floyd’s neck or violent street protests or the infamous January 6 ‘insurrection’ or whatever it is. We had all this exposure to things we could not hitherto have imagined occurring in the ‘greatest nation in the world.’ At the peak of these happenings, during the Coronavirus pandemic, I frantically tried (see January 2021 article) to get some of my American friends to appreciate that Africans are no less human or merely more stupid than they are, and that if there is a difference between their economic status and my motherland’s it was just because, “everything rises and falls on leadership.” Leadership is the tide the raises all the other boats in a society (or otherwise). Most of them, I perceived, didn’t still quite get me.

AFRICA IS NOT THE PROBLEM

Just like we’ve seen in the last few years in America, we’ve also seen in several countries in Europe how “leadership is cause; everything else is effect.” I’ve lost count of how many Prime Ministers Britain has had in the last little while, and we all witnessed with horror the leadership (or the lack thereof) of the last one with the Russian first name. Africa is not the problem, leadership is. Failure of state is not the sole preserve of any nation neither is the flourishing of state the preserve of any nation. Every nation, any nation, rises and falls on its leadership.

These three kings are at work in nation building: Principles, Principals and Principalities. If you like, these actors are Laws, Leaders and Luciferites. Principles are neutral, Principals are supposed to be working for their people while Principalities are against. There are principles that touch on every aspect of life, including leadership. When these principles or laws–which are timeless, universal truths–are lived out, nations do well, families flourish, churches and organizations prosper. When they are broken we don’t.

It is easier to appreciate the physical and chemical principles because we can see and feel and touch them and their consequences. The Law of Gravity is the commonest example of a principle of Physics (physical law). There are leadership principles as well. Many of these are intangible in their operation but produce very tangible effects reflected in socioeconomic and other indices. Nations that live by principles, these consequential laws of the universe that make this world run properly, prosper and nations that do not live by principles don’t. The nations whose principals (leaders) live by these principles prosper; those that don’t do not suffer. It bears repeating that this applies to families, communities, churches, organizations… you name it.

WHERE DEMONS COME IN

Of course, those of us who believe in spiritual things know that over every nation and territory there are also what we call Principalities (Lucifer’s forces). These ‘Luciferites’ (I call them), are spirits that have territorial control that want to oppress nations and not let them come to their full manifestation. Why, you may ask? Out of envy of humans and out of spite for their Creator. But guess what? If you have principals (leaders) who live by principles (laws), including spiritual principles on how to deal with these powers, those nations, those families, communities, churches, organizations and countries of such leaders would bloom.

Africans! let’s stop blaming how socioeconomically bereft we are on Principalities. It is our lack of following Principles—all of us—and particularly the lack of our principals leading in a principle-based manner as they should that has landed us where we are. We have an opportunity on October 7, all of us, to learn more of these principles as principals, whether we are executives in companies, pastors of churches, student leaders, public sector actors or whatever. We must all learn to lead better. When the leader gets better everything everyone else gets better.

Remember the nation whose principal-in-chief was clueless about leadership principles, at least as taught by Maxwell? I feel sorry for his people as I see and hear of their plight each day, worsened by the Coronavirus invasion of our planet. It’s not the devil; it’s our leaders. As one medical colleague pursuing Paediatric Pulmonology in South Africa poignantly commented on my PEP Talk on YouTube about this matter, “Once our Principals follow Principles and we the led are inspired, we will be too busy prospering to blame Principalities.” Enough said. Are our principals hearing?