THE THING ABOUT LAWS | The ’15 Invaluable Laws of Growth’ Mastermind 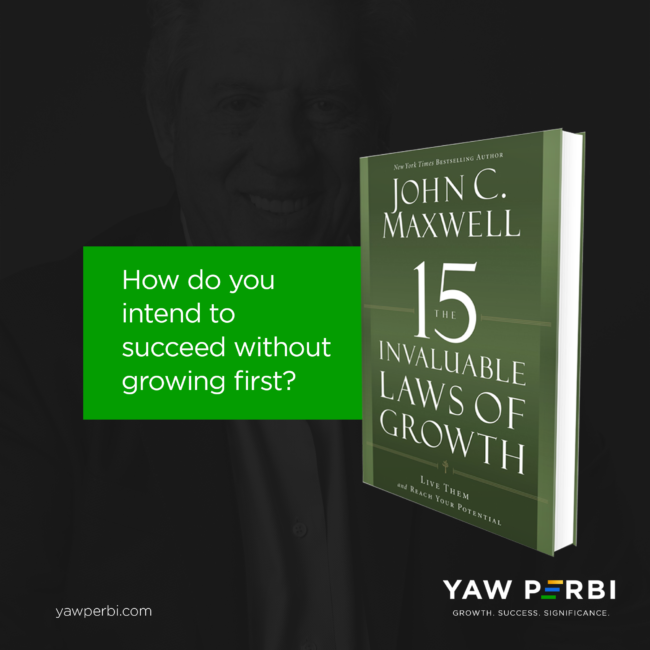 Yes it’s a free world and humans are at liberty to do pretty much whatever we like. Or… well… maybe that’s not entirely accurate. There are laws or principles that have been here before us which we defy to our own hurt, irrespective of how noble our intentions might be. For example, some people intend to succeed in life without first growing. Forget it. It’s a law. That’s a good question. It’s a Law of Success that one must grow first, then succeed.

OF BATTLESHIPS AND LIGHTHOUSES

My all-time favourite story to illustrate the fact that there are fixed laws that govern life in our universe and that they don’t (and won’t) change to suit us but rather we ought to alter our lives to conform to them is this one told by Frank Koch, an experienced man of the seas, in Proceedings:

Two battleships assigned to the training squadron had been at sea on maneuvers in heavy weather for several days. I was serving on the lead battleship and was on watch on the bridge as night fell.

The visibility was poor with patchy fog, so the captain remained on the bridge keeping an eye on all activities.

Shortly after dark, the lookout on the wing of the bridge reported, “Light, bearing on the starboard bow.”

“Is it steady or moving astern,” the captain called out.

Lookout replied, “Steady, captain,” which meant we were on a dangerous collision course with that ship.

The captain then called to the signalman, “Signal that ship. We are on a collision course, advise you change core 20 degrees.

Back came the signal, “Advisable for you to change course 20 degrees.”

By that time, the captain was furious. He spat out, “Send, I’m a battleship. Change course 20 degrees.”

Back came the flashing light, “I’m a lighthouse.” We changed course.

Just like the lighthouse, the laws/principles that run the universe are fixed and provide us a framework to live successful lives and irrespective of our perceptions, status in life, ambitions or raw muscle effort (like the battleship captain) they won’t, indeed they cannot, change course in our favour, we have to.

WHAT THESE LAWS ARE/AREN’T

Principles are fundamental, universal laws and timeless truths that govern everything in this universe. The thing is that the physical principles like the Law of Gravity are more easily appreciated than the ones our five senses can’t readily observe the consequences of.  The laws of success, relationships, finances, spirituality etc. tend to be more difficult for us to wrap our heads and heart around. Even the Law of Sowing and Reaping (or Law of Cause and Effect), that whatever a person sows, that also will they reap, is very much appreciated when it comes to agriculture, yet somehow we miss it when it comes to the good/evil we do to others or even how this law plays out in our financial lives.

Yet these laws of life are “practical realities.”  And the other thing is they’re not partial i.e. they are no respecter of age, gender, geography, religion etc. and they are not not values. Our values are what we value; what we consider good, and they had better be aligned to these universal laws we speak of, otherwise we would bear the negative consequences all the same. Stephen Covey puts it best:

All the wishing and even all the work in the world if it’s not used on valid principles, will not produce quality-of-life results. It’s not enough to set goals or climb ladders. It’s not enough to value. The effort has to be based on practical realities the produce result.

Success doesn’t just happen; it takes growth. Growth doesn’t just happen either; it takes intentionality (Law of Intentionality). I see a lot of hope for and talk about success, yet not so much about growth first, which then leads to success. That is a law of success, my friend, that one needs to grow into success. About a decade ago, I wanted to succeed in real estate investment yet I did not own a single property.  In order to succeed I disinvested all the shares I owned on the Ghana Stock Exchange in order to invest in my growth in this area when Robert Kiyosaki’s team reached out with courses and one-on-one mentorship. If today, I ‘ve owned (and still do) several properties in three different countries, that small success did not come by chance. Not only did I have to grow, I had to sacrificially invest in my growth (the Law of Trade-Offs). So when I hear people say “my principles,” I get what they mean, but really the only thing we own is our values and choices. We get to make choices but the consequences of those choices are already predetermined by the timeless, fundamental laws of the universe. The principles that govern life and success are not ours; they are ‘YUGE’ and not subject to our whims and caprices.

It is always a gift when after years of research people are able to capture in a single sentence or mathematical formula one of the laws of the universe–whether it’s Newton (motion), Einstein (relativity) or Maxwell (growth). And even more special when a series of these laws are captured in a single book, like the Bible.

Post Script
The 2021 cohort for the 15  Invaluable Laws of Growth mastermind is almost full. Are there only 15 Invaluable Laws of Success? Probably not. There might be a few more. But the thing is that there’s no going past these 15 to succeed. There will be ‘mirrors’ at our growth table in January (to get self-aware). Then we can measure the gap between who/where we are now and who/where we want to be and chart an intentional plan to close the gap and succeed.