A Sure Way to Close the Widest Gap in the World 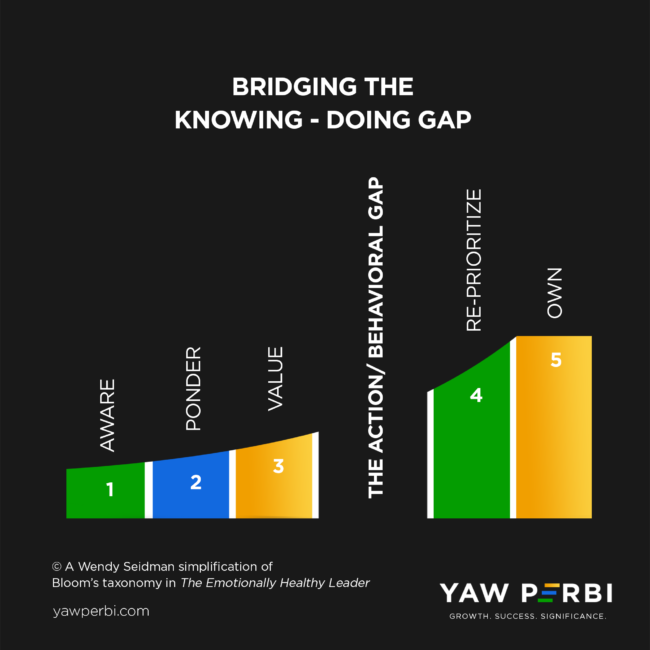 By now you should know for yourself that the widest gap in life or in the world is between knowing and doing. If we all put into practice every right thing we knew, our lives would be remarkably different, incredibly successful. Here’s why we don’t and what to do about it, especially in this season of ‘new year resolutions.’ 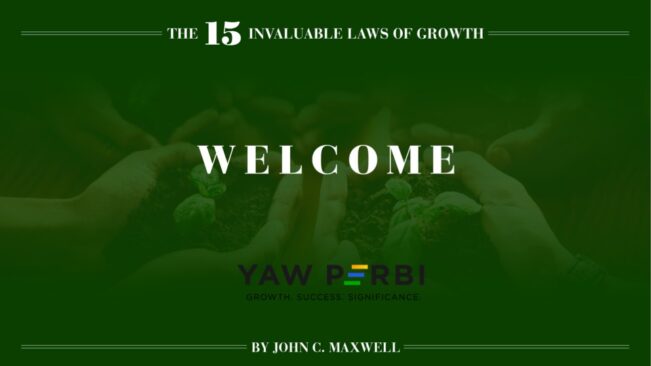 A good John Maxwell question: “Life is in session. Are you present?”

What do a Microbiology PhD, Obstetrician, Civil & Environmental Engineer, Hotel HR Manager in Ghana, Marketing Executive at Ogilvy, Dentist in the United States, Consultant at Accenture, CEO of a Savings & Loans scheme in Uganda and a U.S. military personnel stationed in Italy have in common? And on top of all that, situated in three different continents on the surface not much; except these were all in the same room at the start of 2021 with one desire and purpose: to grow.

There’s no gainsaying that the dozen people constituting the first 15 Invaluable Laws of Growth mastermind group with YAW PERBI in 2021 know a lot. The combined expertise in the room is astounding; it is an honour just to be seated at the table with a leader with 18 years experience at Ghana’s Food & Drugs Authority and the rest of the crew.

We had all chosen to invest the time and money to be part of this mastermind because as Maxwell’s first Law of Growth makes plain, what he calls The Law of Intentionality, “Growth Doesn’t Just Happen.” In fact, “growth is [about] the only guarantee that tomorrow is going to get better”; that 2021 will be better than 2020. Although all these amazing professionals had a hint of this fundamental law of the universe, hence signing onto the mastermind group in the first place, by the end of the first 90-minute session this was so abundantly clear and weighing on us that my personal ‘statement of the day’ came from the FDA leader: “Growth is hard work.” Yes it is! And I’m so proud of these folks who are making an intentional, informed, sustained choice to grow themselves into success and significance!

SECRET TO CLOSING THE GAP

While these already very knowledgeable folks will be even adding further to their professional knowledge vital new information about the Laws of Growth, what will catalyze and even guarantee their change and growth isn’t the HEAD stuff per se.  Of course that’s where it begins but the problem is when it ends there, which is more often than note the case. 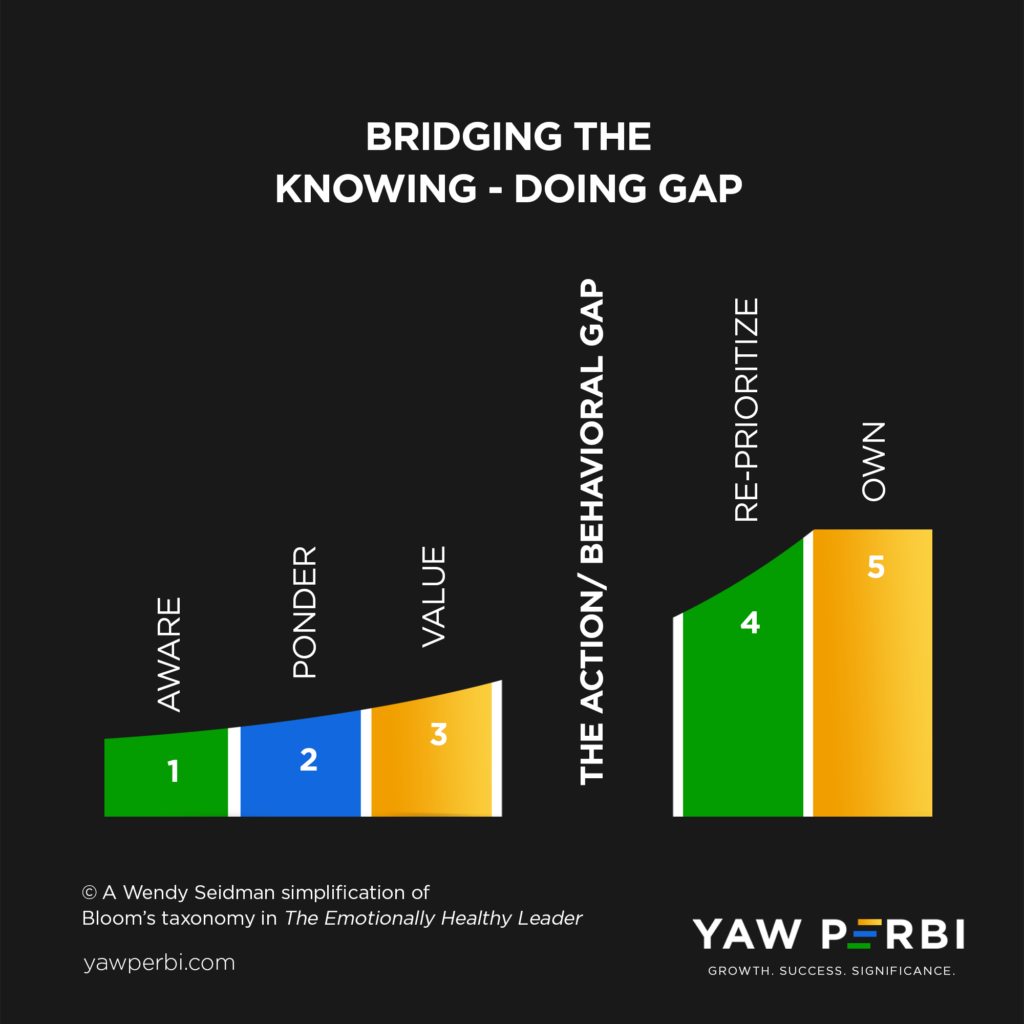 Considering the above Wendy Seidman simplification of Bloom’s famous taxonomy, the secret to the mastermind participants moving from abundant knowledge to abundant living by doing what they know they ought to do to grow will be as follows (this is the same for you if you intend to finally do something with all you already know you ought to do):

1. AWARE: This is a HEAD thing. Many of us begin from not even knowing what we don’t know, right? “Oh! So there are Laws?” ”Ei! And there are Growth Laws in particular?” right? How can people plan to do what they don’t even know in the first place?

2. PONDER: All of us are going to have ample time in between meetings to THINK about these laws but especially when we meet, as the facilitator I’ll be applying the major tool of a coach–questions, questions questions–to help clarify and deepen the pondering process.  I say understanding is the product of pondering. Many times we don’t do because we don’t understand. But thus far, this is all still a HEAD thing.

3. VALUE: When folks actually begin to value that thing they’ve become aware of and have pondered, this is when things have travelled from the head down to the heart.  It’s now a HEART thing. “Hmmmm… it must be important.” “Hmmm it may be a good thing oo…” A value is what you value, right?

I tell you, if “the greatest gap in the world is the gap between knowing and doing,” then the longest distance in the world might be between the head and the heart!  Anatomically it’s only a few centimetres apart but metaphorically, that’s another matter. Yet it is necessary to value a thing, and feel it to move us to do anything. Do you see the word ‘motion’ in emotion?

Yet after our new awareness and pondering have dropped into the heart , there’s still a GAP—nothing changes in our action or behaviour, yet.  It’s still not a HAND thing (action or behaviour) until usually with the help of accountable relationships (like coaches and mastermind compatriots) you gain the quantum energy to scale the action/behavioural gap to the land of re-prioritization. This is the longest and deepest gulf in the world, contributing the most to the gap between knowing and doing.

4. RE-PRIORITIZE:   When you re-prioritize, you actually re-organize yourself, move others and things around you to make that new pondered and valued awareness actionable! Until you have re-prioritized, usually evident in the commitment of time, money (and other resources) and energy/effort, nothing changes.

5. OWN: I can give you an example of an area in which this entire process from awareness to ownership happened in my own life.  It took me about six years to finally re-prioritize and start taking a proper weekly sabbath (not just a day off; to really stop all my work, rest, contemplate on God, delight in Him and his gifts). I can assure you that if I had a consistent, formal coach or mastermind group I was accountable to, it wouldn’t have taken me six years to make the quantum leap I needed to.

After seeing all these long distances and deep gulfs, can you understand why doing what we know is so hard. Come to think of it, who climbs the highest peaks in the world alone? You need a buddy if you’re to make it! That’s why this 15 Laws of Growth mastermind is a blessing! As co-travellers, we’ll all be AWARE of the same laws, PONDER these things (especially through the clarifying questions we’ll all be responding to), we will be expressing what we VALUE to each other’s hearing … and here’s the trick: we are there to encourage each other and hold each other accountable to make the leap to the other side of RE-PRIORITIZING and OWNING our growth and success.

Already, within the first 24 hours of the start of the mastermind, with everyone’s consent we formed a WhatsApp group through which we keep informing and reminding, pondering, valuing, and holding one another accountable to re-prioritize and own our growth journey to success over the next 60 days.

A sure way to close the widest gap in the world is accountable relationships to make the leap from merely valuing new knowing to re-prioritizing things in our lives towards new doing. So now you are aware why we generally don’t do what we know we should or even say we would–and what to do about it–especially in this season of ‘new year resolutions.’  Happy new year!