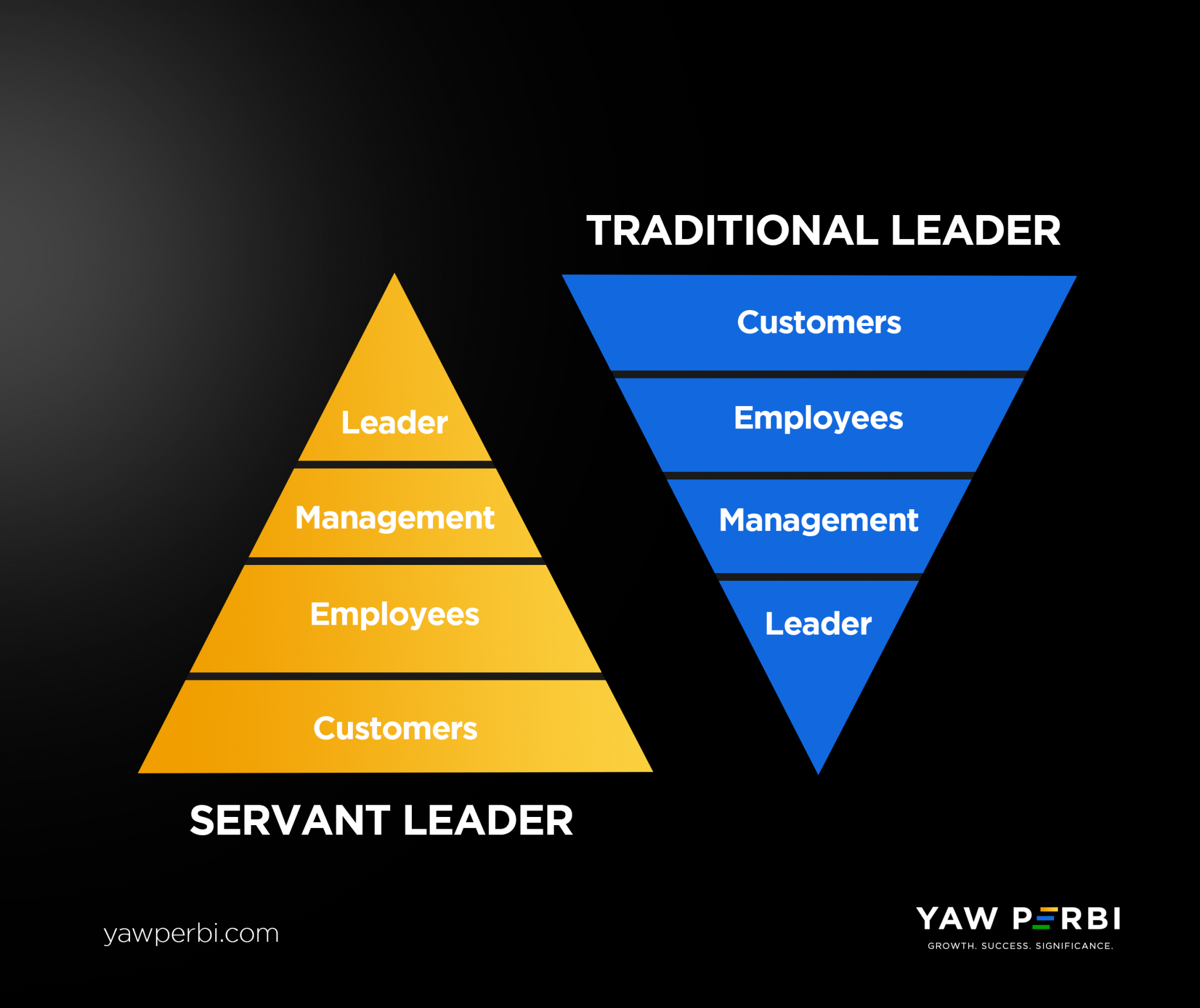 On Monday, we explored leadership theories over the last 200 years at Perbi Cubs Academy (nickname for our Staff Leadership Development program in collaboration with YAW PERBI Executive Education). That Servant Leadership is considered a 1990’s theory never ceases to tickle me.

Growing up in a Christian home I learnt Servant Leadership at a tender age from the life and lips of Jesus of Nazareth. Class act: It was just before the Passover Festival. Jesus knew that the hour had come for him to leave this world and go to the Heavenly Father, God. Having loved his own who were in the world, he loved them to the end. Jesus knew that the Father had put all things under his power, and that he had come from God and was returning to God; so he got up from the meal, took off his outer clothing, and wrapped a towel around his waist. After that, he poured water into a basin and began to wash his disciples’ feet, drying them with the towel that was wrapped around him. (paraphrase of portions of John 13)

When he had finished washing their feet, he put on his clothes and returned to his place and these were his classic words: “Do you understand what I have done for you? You call me ‘Teacher’ and ‘Master,’ and rightly so, for that is what I am. Now that I, your Master and Teacher, have washed your feet, you also should wash one another’s feet. I have set you an example that you should do as I have done for you. Very truly I tell you, no servant is greater than his master, nor is a messenger greater than the one who sent him. Now that you know these things, you will be blessed if you do them.”

Earlier, in response to jostling over position and power among his inner circle, he had contrasted ‘Traditional Leadership’ with ‘Servant Leadership’ and called them to a higher standard: the latter. He told them, “In this world the kings and great men lord it over their people, yet they are called ‘benefactors’ or ‘friends of the people.’ But among you it will be different. Not so with you! Those who are the greatest among you should take the lowest rank, and the leader should be like a servant.”

Through history, many many men and women—including Mahatma Gandhi, Martin Luther King Jnr., Florence Nightingale, Mother Teresa and Nelson Mandela— have exemplified Servant Leadership. This isn’t just altruistic spiritual and sociopolitical talk. Today, professors like Jim Collins (of ‘Good to Great’ fame) speak of the power of such ‘Level 5’ Servant Leaders in business and companies like Southwestern Airlines have benefited from even the commercial value of Servant Leadership.

Two millennia after Jesus, Robert Greenleaf makes Servant Leadership wildly popular and gets credit in the leadership literature for it. Fascinating. Even more intriguing is Greenleaf’s claim that “the idea of the servant as leader” came to him from German Hermann Hesse’s 1932 novel, ‘Journey to the East.’ I wonder where Jesus got his idea and practice of Servant Leadership from.

That was Monday. The musings continued unabated. Then what do I discover is this Thursday morning’s exhortation from the Bible app? “Do nothing out of selfish ambition or vain conceit, but in humility consider others better than yourselves. Each of you should look not only to your own interests, but also to the interests of others.” Those are the words of the lawyer-turned-preacher, Paul, to his audience in the city of Philippi.

The message, to me at least, is clear: just do it! Lead like a servant; serve as a leader.