A young aspiring writer once asked me a question I had never thought of. As a published author–at the time I had just one book to my credit, I think–he asked me, “When you published your first book did you have no concern at all that it might not sell?” Frankly, that possibility had not even crossed my mind, but now that he asked I began to soul search: “Really, what if it never sold?” The lad’s concern is a question of buy-in. In other words, how sure was I that people would buy into me or my message to part with their hard-earned cash for copies. The fact is, within six months I had recouped all my initial borrowed money, paid off my investor and had recurrent capital to keep going. And I haven’t stopped, a dozen-and-a-half books later. Have I just been ‘lucky’?

Another question related to buy-in I recently pondered was during the nineteenth anniversary of the global holistic leadership development organization I founded as a medical student in 2003. I still remember that May Day, workers’ holiday in Ghana (our version of Labour Day), when I gathered eight of my friends and cast a vision of an organization that would inspire and empower young people to discover their God-given purpose and reach their full potential—and that one day we would be international. Somehow they bought into it–was it me, the message, the vision? For weeks we brainstormed until we came up with the name ‘The HuD Group’, then for several more months that followed we set up administrative structures and started running programmes and projects. Today, we have representation and active work in over two dozen countries on all continents with impact in over sixty nations.

These two stories beg the question, what does it take for people to buy into leadership? Almost always, the news from the two countries I’ve lived in for over a decade each and love are replete with stories of government leadership attempting to implement one policy or the other and experiencing resistance or lack of buy-in. In Canada it often is wrangling over oil and gas pipelines. Two of the hottest buy-in issues in Ghana right now have been the passage of a levy on electronic money transfers (especially mobile money) and a not-so-transparent process surrounding the construction of a national cathedral.

With the news as a backdrop, the following precious leadership thoughts have evolved from a confluence of three supposedly independent situations I personally experienced within days of each other. First, during a very enlightening webinar, the trainer, a fellow catalyst with the Lausanne Movement, had mentioned that most people who might not trust a person enough to follow them can at least trust a well-laid out process. Then a couple of days later I was thinking through the incredible leadership feat of the diasporic Jewish cup-bearer-turned-city-builder Nehemiah. In preparation for Lausanne leaders meetings in New York City, I had begun to re-read that Hebrew Bible classic case study in leadership and was intrigued by how one man’s burden became a whole nation’s blessing. Thirdly, this was the same weekend I was to ‘walk the stage’ to accept my Covid-delayed Master of Arts in Global Leadership degree from Fuller Theological Seminary. That’s my mentor Dr. John C. Maxwell’s alma mater as well, and I was pondering what John calls “the Law of Buy-in.”

THE 3 P’S IN THE LEADERSHIP EQUATION

From my academic learnings and practical experience, I have come to appreciate that there are three (3) main routes to leadership buy-in. When I speak of three ways people buy into leadership, I suppose most people would read that as three ways people buy into a leader/leaders but no. Leadership is a relational process with three key cardinal points: the Person of a leader, the People being led and the Purpose being pursued. 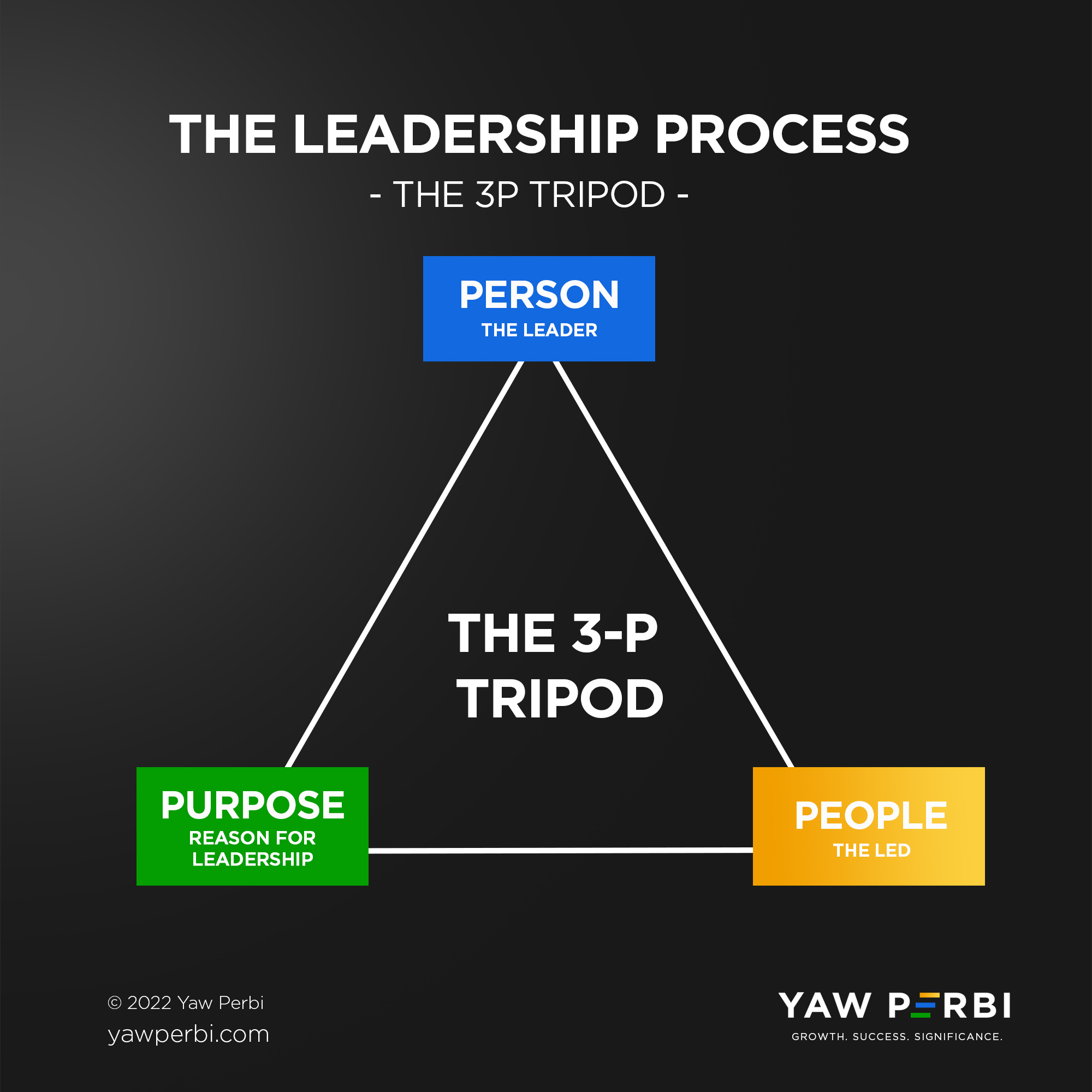 More often than not, the leader–who is a responsible Person that serves and influences People to achieve a shared, noble Purpose–is the one who feels the burden of a need, like in the case of Nehemiah in the fifth century B.C. Everyone knew that the Jewish remnant that had survived the exile was in “great trouble and disgrace” and that “the wall of Jerusalem was broken down and its gates charred to coal.” Somehow this burdened Nehemiah profoundly. It is such deep burdens that lead to burning desires which result in vivid visions (purpose), like an ambitious 52-day-city-wall-rebuilding capital project for those in Nehemiah’s day.

Then from the Purpose is a Plan/Process to which people are mobilized who then (hopefully) catch the same burden, develop a similar desire and apprehend the same vision. This is what I call the Leadership Buy-in Scheme:

In my opinion, the most sustainable mobilization of People to join a cause is when they can get it right from the burden phase, to the desire stage and then catch the vision or Purpose. Some cut to the chase and just buy into the desire or even more direct, straight into the vision/Purpose. These routes work too but from over three decades of being in the leader development space I find nothing beats starting from two blocks back. The primary way people get mobilized to a cause is to buy into the burden (A1), then the desire (A2) and then the vision (A3). 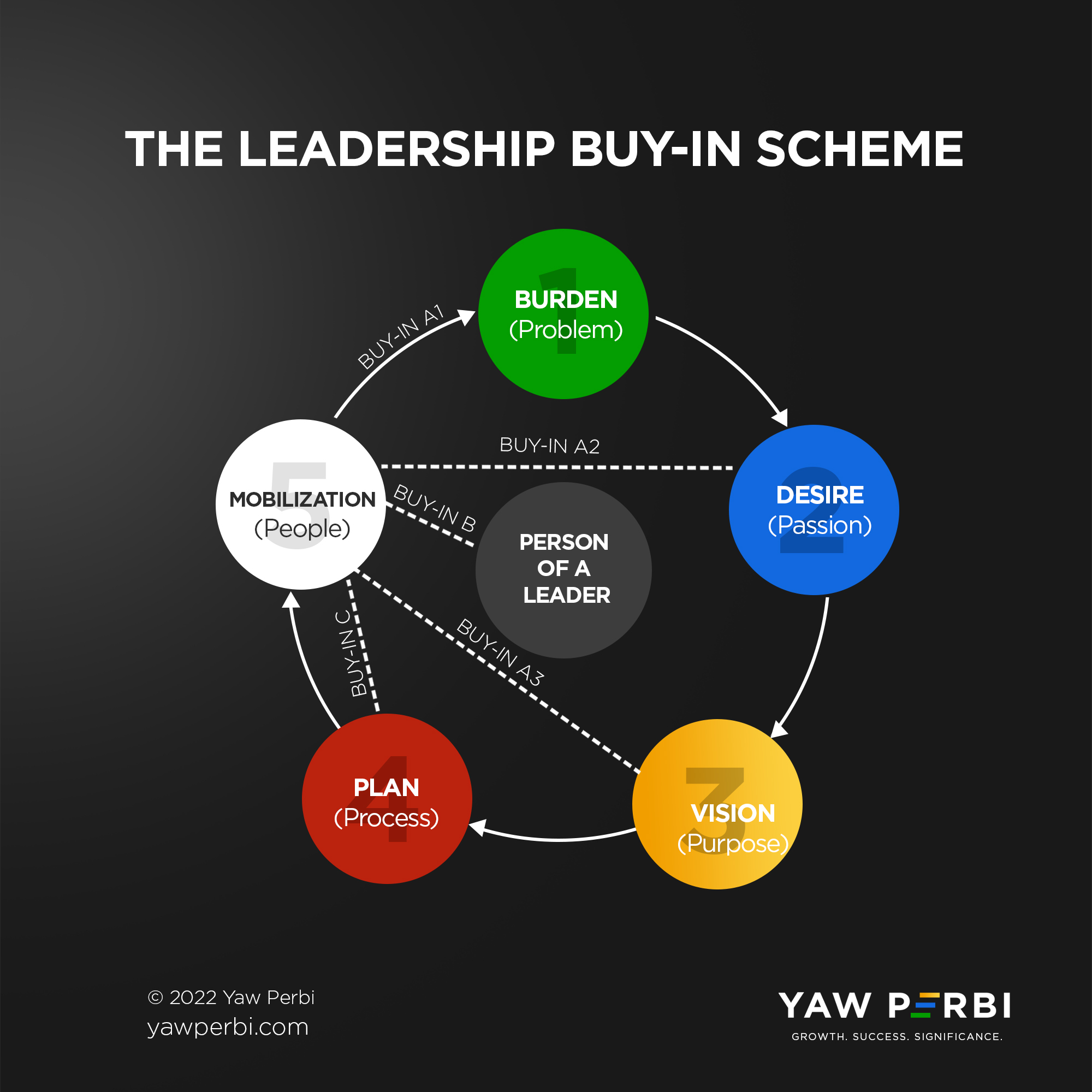 The entire leadership buy-in scheme revolves round the Person of the leader. Often, (s)he is the one People are mobilized to buy into, almost not caring about the Purpose or Process. While I surmise this pertains mostly to collectivist cultures, even some from individualistic cultures swear by this as the number one way people are mobilized to a cause. In fact, for John C. Maxwell, this is the Law of Buy-in. As the fourteenth law in The 21 Irrefutable Laws of Leadership, Dr. Maxwell states that “people first buy into the leader, and then into their vision.” So in other words, if you want others to follow your vision (Purpose), you need them to, first and foremost, follow you—their leader.

While there may be a lead Person people buy into, they might very well also buy into other People the leader has surrounded himself with or already galvanized.

So back to the beginning, the initial webinar statement that precipitated all these copious leadership thoughts. We were discussing a context where someone was attempting to lead a network of other organizations to tackle a big dream that neither one of their entities, no matter how big, could handle alone. Remember that the presenter had stated–he didn’t come across as postulating, he was stating a principal principle–that people trust a Process/Plan even before they trust a Person.

Having lived on both sides of the Atlantic for at least more than a decade each, I see the Two-Thirds world (Africans, Latin Americans and Asians) more likely to buy into the Person first and and the Western world generally inclined towards trusting the Process first.

So the three ways people buy into leadership are via the Purpose, Person and/or Process. We could also say buying into the Message, Messenger and the Medium (why else do you think advertisers pay huge sums of money to have influences be their messengers?). At the end of the day, a leader requires a team to make the dream. No great vision can be accomplished by just one (wo)man, no matter how great they are. The best mobilized people for a cause is when they buy into the Purpose, the Person and the Process–all three. Even for the Purpose, it’s best when they first feel the burden and grow it into a desire before it becomes a vision to pursue rather than just plugging straight into the vision. People buying into two of the three P’s is not so bad either but how could a two-legged stool ever rival one that has three solid legs? Aim for the triple buy-in: the Purpose, the Person and the Process.