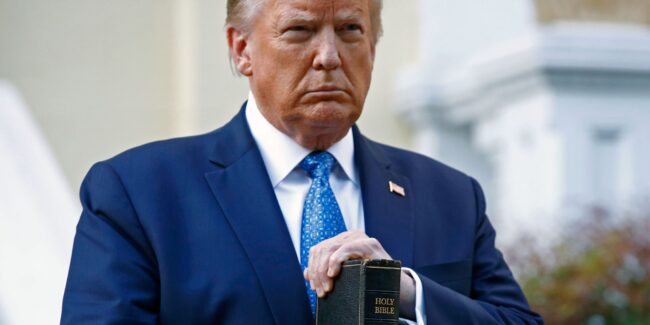 President Trump propping up a book that could flip his life and leadership if he would read and apply it. Same is true for us all! (Photo credit: The New Yorker)

“Stopping Trump is a short-term solution. The long-term solution, and it will be more difficult, is fixing the educational system that has created so many people ignorant enough to vote for Trump.” (Andy Borowitz, a satirist)

Let me begin with a disclaimer: I do not subscribe to the notion that everyone who voted for Trump is ignorant. That would be an unfair characterization. Politics is more nuanced than that. I say there are at least 3 Ps that go into one’s choice, none of which is perfect in any political party and hardly are all three aligned with what is Biblical: the PERSON (as in flag bearer), the PARTY and the POLICIES.

Having said that, how did the most powerful nation in the world end up with such a leadership crisis? I’m not just talking about the nail-biting U.S. electoral college vote count last week and the current situation where a winner has been projected but the incumbent hasn’t gathered what it takes to concede and congratulate. I speak of four years ago when America had to choose between two wannabe leaders of the free world both of whom the electorate had serious reservations about! America was caught between the red devil and the deep blue sea.

And the last four years have portrayed nearly everything I’ve been taught that leadership is NOT exhibited by the man in the White House. Is it competence in inspiring confidence about the Coronavirus pandemic and quenching it or a character of what is good and right and true or care and respect for ‘the other’? Competence, character and care constitute the DNA of leadership. Of course Trump did do some good things. I have even admired his non-political-correctness and tough skin in forging ahead buoyed by the courage of his convictions (no matter how misinformed I think they might be sometimes). By and large, however, I have had to repeatedly tell my children too many things about Trump that leadership is NOT.

When I saw Van Jones weep on television that as a parent the defeat of Trump and the elevation of Biden is a testament to the fact that character matters in life and leadership, I very much identified with that. Character matters. Truth matters. Decency matters. And one would think the white evangelical church in America would know better than a journalist.

If the one country that has produced the most world-impacting heads of states, Nobel laureates (390 of them; the UK which is next is at 135), stellar entertainers and astounding professional athletes could face such a gaping leadership crisis then the rest of the world had better watch out. In my Twi language from Ghana, there is a saying that when you see your neighbor’s beard on fire, you had better quickly fetch a bucket of water and place it beside yours (well, hopefully after you’ve helped him doust his!)

The S word is one that isn’t in my vocabulary. Permit me to get into the gutters in this little stretch so we both appreciate the abyss leadership sunk into these last four years. When Trump was elected I was hopeful. My family’s explanation to a United States border agent that we were crossing over from Canada to upstate New York to check on our investment property had been described by this kid in the border cage as “Such a Shitty Story.” When I wrote about that in January 2017, I was hopeful that a Trump presidency would catalyze the noble dreams Martin Luther King Jnr. had for his four little children (and my six) and not turn into the nightmare many feared. The latter has happened. Blacks still can’t breathe in 2020, George Floyd’s slow slaughter being the epitome of that.

As one born and raised in Africa I have long experienced firsthand that “everything rises and falls on leadership.” Whether as a young medical doctor in Ghana seeing patients die who shouldn’t have or as a United Nations peacekeeping soldier in Cote d’Ivoire beholding with my own naked eyes the ravages of war, there is no other one word that summarizes all that’s wrong with my continent as ‘leadership.’ The sad socioeconomic state in the midst of abundance earned us the disparaging title of “Shit hole countries” by President Donald Trump who ironically has gone ahead to look, sound and act in the very manner people who have misled, unled, disled Africa have.

Leadership is a sacred trust. Twenty years ago I was so concerned that leadership knowledge and mindset, character and skills be acquired early that I co-founded The HuD Group to intervene at the youth level and change the African narrative. Nearly 20 years later I am still convinced that leadership development and training must start early but even earlier: with children. And it begins by calling them “cubs” who will grow into lions and not “kids” who will grow into billy goats gruff (or the trolls in that fairy tale, for that matter LOL).

While at my executive education company that bears my name, YAW PERBI, we’re intervening at the C-Level, Perbi Cubs Library Services is beginning from the very roots: with children and from our homes and schools. I’ll tell you why we launched the Lions In Training (LIT) Track at Perbi Cubs only a couple of weeks ago (although we’ve been dreaming about this for a long long time). LIT is the collective attempt of Perbi Cubs and parents who are preparing the next generation to meet the great challenges and opportunities of the twenty-first century and thrive! The LIT track is to help groom our Cubs into holistic Leaders (Lions). The Perbi Cubs reading community knows that the future of our reading Cubs is promising because of the world of opportunities opened to them every day as they open books to read. For sure, readers are leaders.

Reading, however, is necessary but not sufficient.In this light, Perbi Cubs desires to partner parents to nurture Cubs in relevant soft skills that will take them places and form them into young well-rounded leaders of great impact. Research shows that a leader is developed over the entire course of their life: from womb to tomb. It is never too late to start teaching, learning and applying leadership skills to everyday life.

Next, I’ll show you HOW we’re going about it. For now remember, Trump’s orange hair is on fire; we all had better get a bucketload of godly, effectual leadership to sit by our beards!

*NB: YAW PERBI serves as consultant, coach and trainer for Perbi Cubs and is not involved in the day to day management of this groundbreaking social enterprise. If you require YAW PERBI’s assistance in executive coaching, management consulting or leadership training reach out to yawperbi@gmail.com.