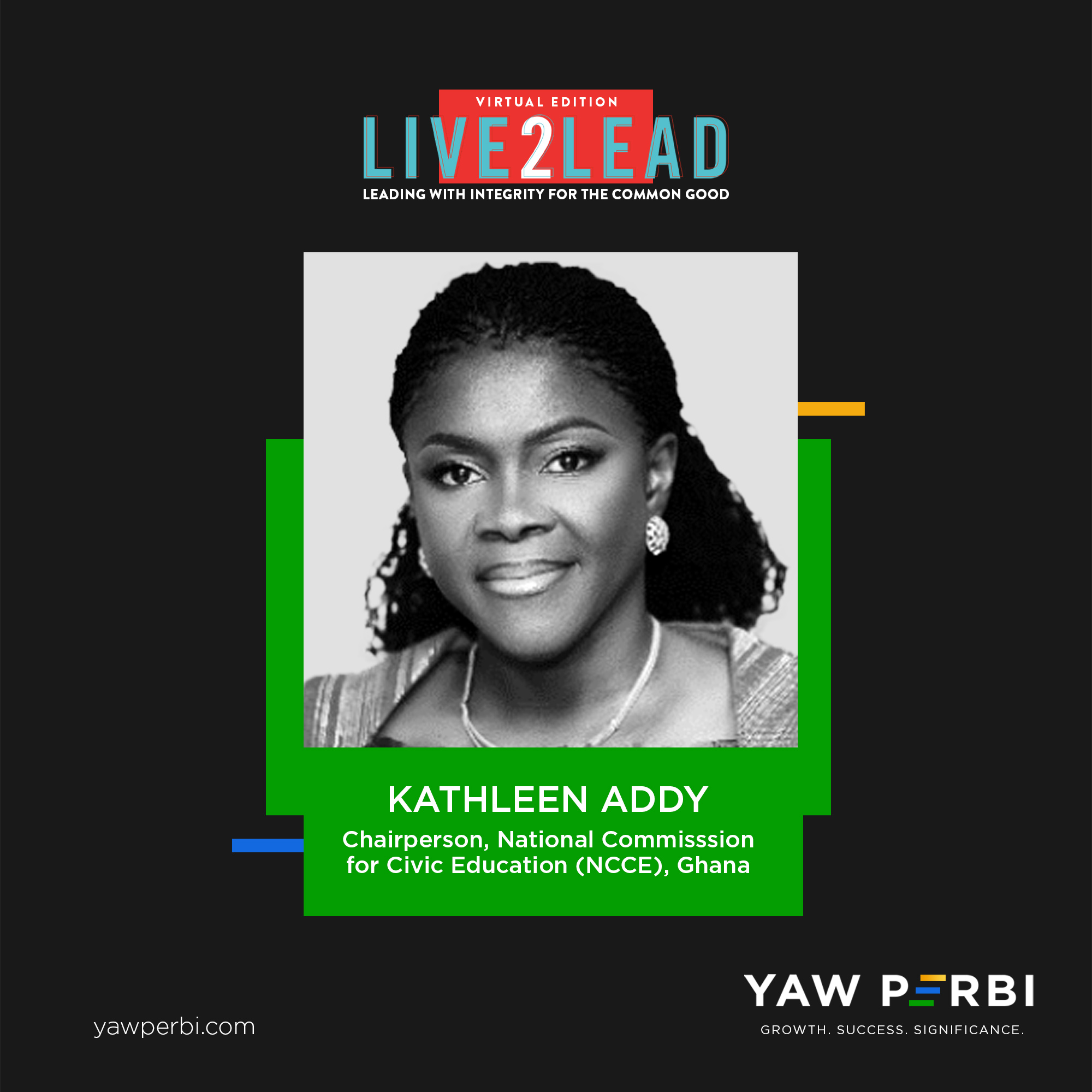 Meet Kathleen Addy, the Lady with Gravitas for Civilitas

Kathleen Addy is the Republic of Ghana’s National Commission for Civic Education (NCCE) chairperson, appointed in 2022 by the president of the Republic from her Deputy Chair of the Commission role. Ms. Addy had been in charge of Finance and Administration since 2017. Kathleen is highly regarded as a civic activist with particular interest in women’s empowerment as well as accountable and responsive governance, and has supported different civil society groups fighting for good governance and women’s rights in Ghana.

She was once upon a time a Research and Communications Officer at the Center for Policy Analysis focusing on Women’s Economic Empowerment and was the Afrobarometer Communications Manager at the Center for Democratic Development.  Kathleen holds a first degree in Psychology and a Master’s in Communications from the University of Ghana, Legon. She is also an alumna of Achimota School and Holy Child School.  In her role as a Chairperson of the NCCE, Ms. Addy brings her expertise and vast experience in the development sector, as well as her passion and drive to bear on the work of the commission.

Gravitas was one of the ancient Roman virtues that denoted “seriousness.” It is also translated variously as weight, dignity, and importance and connotes restraint and moral rigour. It also conveys a sense of responsibility and commitment to the task. Kathleen’s got gravitas. Meanwhile cīvīlitās, the feminine Latin word that speaks to politics and the art/practice of government, also connotes courteousness, politeness, dignity, civility, moderation, and restraint. Not only has Lady Kathy got all these, she has a passion to see every Ghanaian born of a woman possess these, and in abundance too, hence her passion for civic education.

INTEGRITY AND A NEW GHANA

At the just-held Live2Lead conference, the First Lady of Civilitas began her submissions with a chuckle, as she noted with candour how the public sector from which she hails has become the poster child for lack of integrity. She herself shared how coming from think tanks and CSOs, she got a culture shock when she first landed in the public service in 2017. “A lot of people don’t even know what the wrong thing is because wrong has been normalized,” she asserted.

But she ended with a ROAR. By the time she had shared how ‘friends and family’ who expected favours like getting an upper hand in the commission’s hiring had had a rude shock that she only gave them enough support to follow due process, the audience would doff their hats for such a principled public sector leader. We trust that the many public sector folks sponsored to attend were inspired to also lead with integrity, right in the corner where they are.

Live2Lead Ghana was wildly successful. We give glory to God. The plan to strategically rope in the public sector was a good idea and well-executed. We are grateful to all our corporate partners whose generous sponsorship made this possible, and the participation of several emerging leaders from our schools and universities. The dozen or so organizations and companies who ensured 10 or more of their leaders were present are true patrons of a Ghana that can be lead in integrity for the common good. One bank sponsored nearly 60 of their leaders, while another invested in 40 of theirs. Poco a poco, intentionality about leadership development will become a culture that rewires our nation for growth, success and significance.

God bless our homeland Ghana with gravitas for civilitas, and make our nation great and strong.