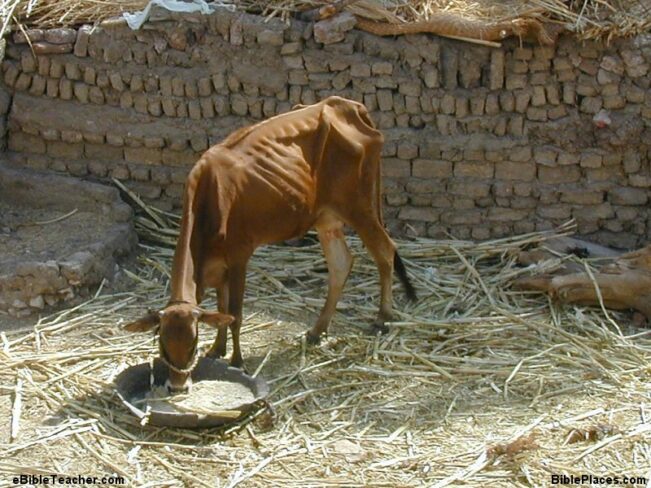 The first time I heard the story about the little cow, it was from the lips of a millionaire. Gathered in the conference room of some hotel in mid-town Montrèal, this man who had made his money from the financial services industry was urging us on to let go of our little cows, mainly JOBs (which people in his circle called “Just Over Broke”) and go chasing those dreams that will stretch us, pain us but in the end be most gratifying.

Recently, I decided to search online for the story and finally found it, author unknown. Here goes.

A scrawny, little cow you might be staking your life on (Image credit: eBibleTeacher.com)

A master of Wisdom was traveling through the countryside with his apprentice when they came to a small, disheveled shack on a meagre piece of farmland. “See this poor family,” said the Master, “Go see if they will share with us their food.”

“But we have plenty,” said the apprentice.

The obedient apprentice went to the home. The good farmer and his wife, surrounded by their seven children, came to the door. Their clothes were dirty and in tatters.

“Fair greetings,” said the apprentice, “My Master and I are sojourners and want for food. I’ve come to see if you have any to share.”

The farmer said, “We have little, but what we have we will share.” He walked away, and then returned with a small piece of cheese and a crust of bread. “I am sorry, but we don’t have much.” The apprentice did not want to take their food but did as he had been instructed. “Thank you. Your sacrifice is great.”

“Life is difficult,” the farmer said, “but we get by. And in spite of our poverty, we do have one great blessing.”

“What blessing is that?” asked the apprentice.

“We have a little cow. She provides us milk and cheese, which we eat or sell in the marketplace. It is not much but she provides enough for us to live on.”

The apprentice went back to his Master with the meagre rations and reported what he had learned about the farmer’s plight. The Master of Wisdom said, “I am pleased to hear of their generosity, but I am greatly sorrowed by their circumstance. Before we leave this place, I have one more task for you.”

“Return to the shack and bring back their cow.”

The apprentice did not know why, but he knew his Master to be merciful and wise, so he did as he was told. When he returned with the cow, he said to his Master, “I have done as you commanded. Now what is it that you would do with this cow?”

“See yonder cliffs? Take the cow to the highest crest and push her over.”

The apprentice was stunned. “But Master…”

“Do as I say.” The apprentice sorrowfully obeyed. When he had completed his task, the Master and his apprentice went on their way.

Over the next years, the apprentice grew in mercy and wisdom. But every time he thought back on the visit to the poor farmer’s family, he felt a pang of guilt. One day he decided to go back to the farmer and apologize for what he had done. But when he arrived at the farm, the small shack was gone.

Instead there was a large, fenced villa.

“Oh no,” he cried, “The poor family who was here was driven out by my evil deed.” Determined to learn what had become of the family, he went to the villa and pounded on its great door. A servant answered the door.

“I would like to speak to the master of the house,” the apprentice said.

“As you wish,” said the servant. A moment later a smiling, well-dressed man greeted the apprentice.

“How may I serve you?” the wealthy man asked.

“Pardon me, Sir, but could you tell me what has become of the family who once lived on this land but is no more?”

“I do not know what you speak of,” the man replied, “my family has lived on this land for three generations.”

The apprentice looked at him quizzically. “Many years ago I walked through this valley, where I met a farmer and his seven children. But they were very poor and lived in a small shack.”

“Oh,” the man said smiling, “that was my family. But my children have all grown now and have their own estates.”

The apprentice was astonished. “But you are no longer poor. What happened?”

“God works in mysterious ways,” the man said, smiling. “We had this little cow that provided us with the slimmest of necessities, enough to survive but little more. We suffered but expected no more from life. Then, one day, our little cow wandered off and fell over a cliff. We knew that we would be ruined without her, so we did everything we could to survive. Only then did we discover that we had greater power and abilities than we possibly imagined and never would have found as long as we relied on that cow. What a great blessing from Heaven to have lost our little cow.”

Everyone of us has a little cow that stands in the way of fulfilling our full potential. So what’s your little cow? Now imagine a little child who remains tight-fisted over a quarter, a 25-cent coin, when you are eager to give them a $100 bill you’re hiding behind you and encouraging them to ‘open up’ and ‘let go’ of the quarter to receive. They aren’t able to receive the $100 because they would rather keep the little that’s surely in hand than open their palm and risk losing the quarter, although they might very well know that what they could gain might be way better.

You probably have heard it said that often the enemy of the best is the good. What is your little coin or little cow. Let it go; kill it!