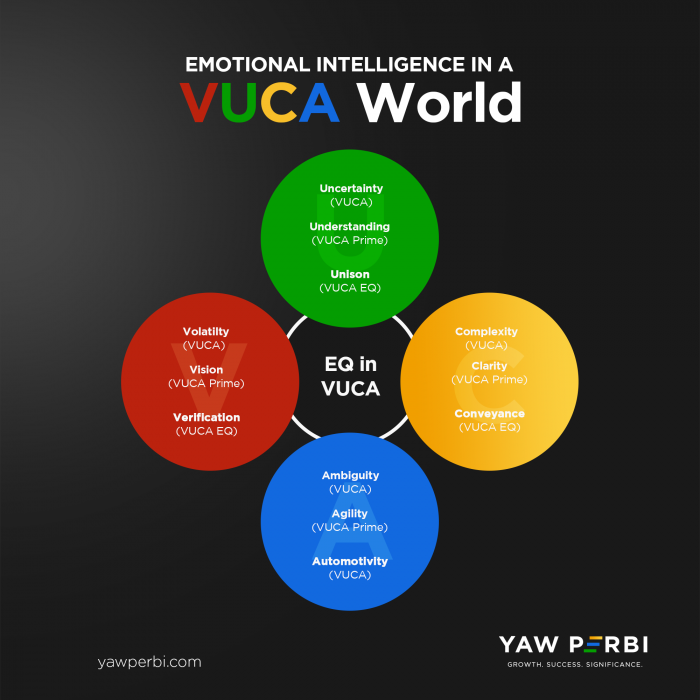 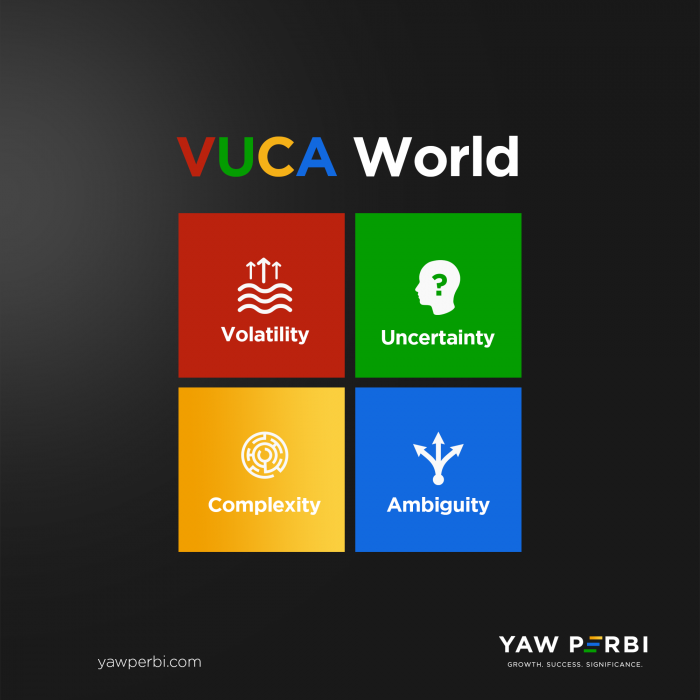 As one of the Pan African Cohort facilitators of BCA Leadership, I just got off a scintillating Zoom call with amazing African C-level leaders from across the continent—East Africa (like Kenya and Uganda), West Africa (I recall Nigeria, Sierra Leone and Ghana), North Africa (Egypt) and Southern Africa (Malawi, South Africa). We talked about Emotional Intelligence and the whole idea of VUCA. The goal of this blog is to summarize the essentials of the topic, which most participants described as ‘intriguing’: “So you think you can lead effectively without EQ in a VUCA world?” Really, this is a rhetorical question because no one in their right senses would say, “Yes, I can lead effectively without Emotional Intelligence (EQ)” in the first place, let alone in a world that’s described as VUCA.

WHAT ON EARTH IS VUCA?

VUCA is a term that came from the military space, especially at the end of the cold world war when without the two clear polarizing forces the whole world was described as Volatile, Uncertain, Complex, and Ambiguous.  Guess what? If the end of the last century was said to be VUCA then imagine just how much more VUCA it is now. Look at the volatility of the world today, look at the speed of transformation, the dizzying digital economy. Consider the uncertainty with COVID-19 and this post-pandemic world. Is it even a post-pandemic or rather para-pandemic world as in some places it seems over and in others, COVID is still raging? Look at the complexity of the world. How could a microscopic virus emerge in a small place in some corner of the world called Wuhan, China, and the whole world gets grabbed into this? Some things are just ambiguous right now. It’s a VUCA world. There wouldn’t be enough space to write out all the feelings these VUCA times have generated in people, especially anxiety.

Even before the VUCAness of the world, Emotional Intelligence had been identified as the key thing for succeeding in leadership. It is archaic 20th century thinking that IQ (intelligence quotient) makes a good leader for a total leader not only has IQ, in terms of book smarts or cognitive intelligence, but also Emotional Intelligence (EI/EQ) in terms of being intelligent about feelings and Global Intelligence (GQ). Humans like to think we are rational people but at the end of the day we are emotional beings. The term was first coined in 1990 by researchers John Mayer and Peter Salovey, but was later popularized by psychologist Daniel Goleman five years later.

We now know that 80-90% of success in Executive Leadership depends on Emotional Intelligence and not cognitive intelligence. Don’t get me wrong, I am not dumb. I am a medical doctor for crying out loud. Intelligence is important but guess what? When it comes to Executive Leadership, IQ only gets you into the door, it takes EQ to play the game. And win. After about 128, IQ doesn’t matter anymore! Given the same level of IQ, technical skills, and competence, it’s EQ that would make all the difference in how much one succeeds (or not).

Emotional intelligence, according to Psychology Today, is “the ability to identify and manage one’s own emotions, as well as the emotions of others.” It is thus made up of the following four blocks: 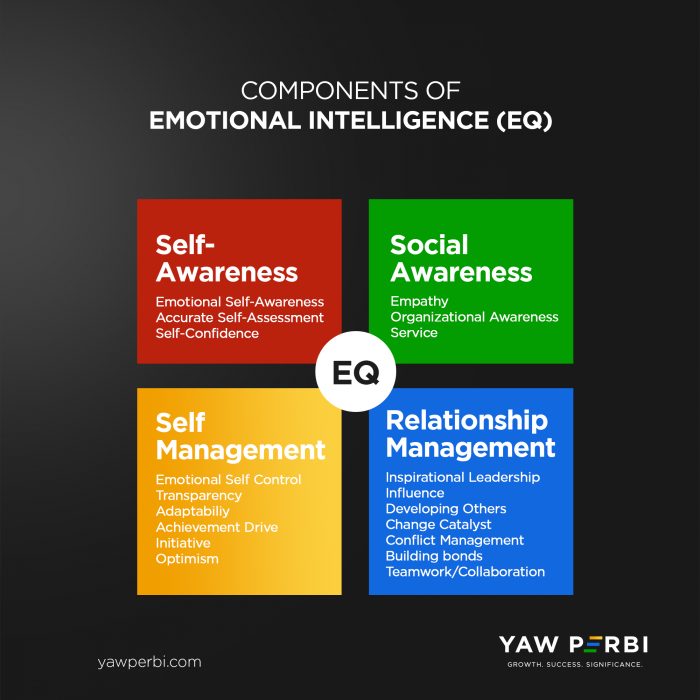 So being the amazing leaders we are, we figured out we cannot just sit idly twiddling our thumbs and watch VUCA happen without responding. In 2007, one Robert Johansen (a distinguished fellow at the Institute for the Future), came up with a behavioral leadership model he called VUCA Prime to counteract each of the four elements of VUCA with a specific positive response which starts with the same four letters. VUCA Prime then is to have Vision over Volatility, to overcome Uncertainty let’s have Understanding, then Clarity over Complexity and to overcome Ambiguity let there be Agility.

Well, I have been studying this since the pandemic began and was thinking recently how good VUCA Prime is but how so very cognitive it is! Why is VUCA Prime so cognitive and does not take enough emotions into cognizance especially when we know 90% of success will depend on a leader’s emotional awareness (of self and others) and responses?

WHAT IS VUCA EQ THEN?

Consequently, I have designed something called VUCA EQ to provide a more comprehensive and potent leadership response to VUCA beyond the cognitive, one that significantly takes emotional intelligence into consideration. Like VUCA Prime, each of the VUCA EQ responses also begins with the same four letters.

Secondly, instead of Uncertainty and just responding with the cognitive Understanding that VUCA Prime proposes, we rather respond in Unison. What I mean by Unison is to respond with our three brains. You have the cognitive brain but you also have your emotional brain called the limbic system. EQ is not just a ‘heart’ kind of thing, no! Emotional Intelligence has to do with the brain too. Or even more annoying, called ‘soft skills.’ EQ produces hard results on the balance sheet and cashflow statements! There is the Cognitive brain, Emotional brain, and Instinctive brain and VUCA EQ is about responding with all three in unison.

For Complexity, not only overcome with clarity but with Conveyance. Powerfully transmit emotional then logical information and carry across values and perspectives, considering emotional data and communicating emotions first. Remember to start with emotional data when decision-making and communicating eg. I feel vexxed about this decision and I’m aware most people in the company feel anxious….  Connect with emotions and convey them in response to complexity.

Then finally, for Ambiguity, not only thrive with agility but by Automotivity. In other words, learn to move people’s emotions or move people emotionally. Automotivity means containing within itself the means of propulsion or movement. Mobilize people in such consonance and resonance with what they want (motives) and how they want (motivations) that they move in a self-propelling manner. After all, why do you suppose feelings are called e-motions? Feelings move us, they move the world. We may not like to acknowledge it but they do. How do you learn to know people’s motives and their motivations so that you can ride on that to send them (better still, travel with them) to a place where they ought to go?

Leadership is in the transportation business. We move people from here to there and without the power of Emotional Intelligence to move people (think e-motions) towards a shared, noble purpose, we are going nowhere ourselves in the first place and taking no one with us for that matter. Don’t you ever think you can successfully lead, especially in this VUCA world, without Emotional Intelligence.